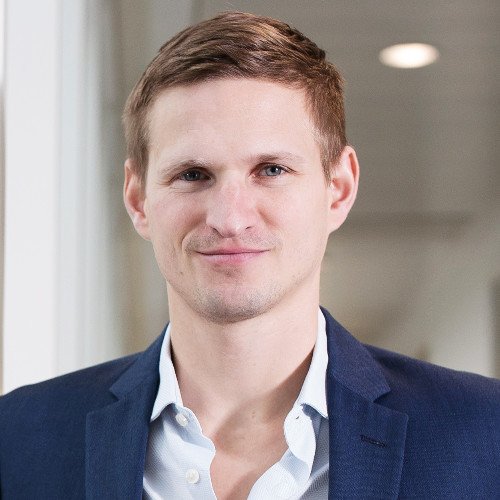 Oliver Hardick is a Tech Entrepreneur, Angel Investor and Founder of Puridify. Puridify was a bioprocessing start-up that developed a nanofiber- based platform purification technology for biopharmaceutical production. Under the guidance of Oliver, the company was acquired in 2017 by GE healthcare.

Q:If you were to start over tomorrow and go back to when you were first starting Puridify, what advice would you give yourself?
‍A: Simple, I would say ‘think bigger’. If you really believe in the technology and have the advocacy and the support from the end user then think bigger.

‍Q:What originally inspired you to develop your idea into a company? What was the problem that you were trying to solve?
‍A: There was a known challenge with protein chromatography for the industrial purification of monoclonal antibodies owing to the high cost of that process. A chance meeting between my two Principal Investigators at UCL and Rutherford Appleton Laboratory (RAL) led to a relatively simple proposal being developed into a PhD project.I spent the first two years of that doctorate at RAL, commuting from London to the middle of Oxfordshire and although it was a biochemical engineering degree it really started off as a material science project. I started with a series of different polymers trying to create different materials from them, ultimately making a functional filter prototype material and then applying mechanical engineering CAD design to create a filter housing and then some hardware system development with valves and electronics to operate the purification process. It was just a process of trying to get something to work, crossing disciplines and trying to find where other people had made progress in a different science that could be applied to this one. To answer the question about what inspired me to turn it into a company – well that was never the intention in the beginning. I feel like much of my journey was serendipitous and I guess that’s partly down to having a privileged position and partly down to maximising exposure to opportunity. Even at the end of my doctorate there wasn't any sort of clear intent to create a company. We had filed some IP, but it was a colleague from RAL that I met up with towards the end of my doctorate who suggested an enterprise fellowship that was run by the Royal Society of Edinburgh. It just seemed like a good idea. It was essentially 12 months funding to develop a business case, build a network and see if there was any sort of commercial value to the technology. That was the tipping point for me starting the company.Being a first-time entrepreneur has a lot of uncertainty and presents a huge learning process throughout. What makes it fun is every year is significantly different from the year before. What I found most surprising was the amount of support people are willing to give with no real benefit to themselves throughout that process just because they want to see other people succeed – particularly young people.

‍Q:Is there a particular point in that journey where the advice of ‘think bigger’ really stands out?
‍A: For us, the business plan from the time of first investment was always to attract the attention of the big players in the space who would be interested in acquiring the technology – companies like GE, Pall, Millipore etc. When we got to that point, we had a couple of big players who really wanted to buy the company, but we could have taken a further investment round and continued the development and commercialisation ourselves.A big part of being a first-time entrepreneur is the success story and that’s also true for the people that have been brought on that journey with you, so when you get the opportunity to culminate everything in a successful exit to a strong player like GE, it's quite difficult to turn that down. With the benefit of hindsight, it would have probably been better to continue independently for a couple more years to reach a further value inflection point as the industry has ended up in an incredibly positive place since that acquisition - helped immensely by the past two years with COVID. However, it could have been very different, and things could have taken a turn for the worse. It’s hard as you always have that doubt, right? You don’t really know how successful or how much value there is in your technology at that early stage.
‍

Q:What do you look for in the people you hire?
‍A: I think the biggest challenge with the pandemic over the last two years has probably been recruiting. The industry has really boomed and trying to find the people that we needed to grow at the rate that we did has been really challenging.It’s a critical question and I’d go further and say what do you look for in the people you surround yourself with in general? People that make your entrepreneurial journey a success – mentors, advocates, funders, teammates, collaborators, and customers. Everything really revolves around people and that’s also where weak links can develop if you don’t manage and encourage the best from those people. More specifically on those early hires it is critical to identify the core skills gaps that you have in your organisation and hire to fill them. For example, we were very lucky to hire a very skilled chemist very early on and that was really important in our early steps as a company and in pushing our technology to a different level. Beyond that, you must get the team fit and culture right. If you hire someone that doesn't fit then they start having a negative impact on both their own work and on other people in the team as well. That can also work conversely. If you hire the right person, they can also elicit more out of your team. For me, people are the single most important thing in an entrepreneurial journey. I should also mention that I was really very fortunate in having Iwan as a co-founder. We think very differently and are quite different people in many aspects, but we get on really well. We have completely differing opinions on many matters and that hopefully has meant that we tested a lot of different approaches and ultimately ended up pursuing the best one. It really can make a difference having a co-founder, having someone always there to talk to and bounce ideas off was amazing.

‍Q:How have your priorities changed?
‍A: They’ve really changed over time. The priority for me within Puridify was always to create value and that may sound obvious, or it may even come off as sounding a bit crude, but the ways and approaches needed to achieve that value creation is probably the more interesting/ crucial bit for me. Our entrepreneurial journey was only four years from incorporating the company until exiting and I've since spent four years in two large corporates. First GE Healthcare, the company that acquired us, and now Danaher. It is fundamentally different to a small company environment, and it's been enlightening to be sitting on the other side of the table. Today I feel incredibly fortunate to have been on the journey and to have had the learning experience that I have with all the support I mentioned and the countless number of people I met on that journey.If I had to distil what I want my next achievement to be, it’s to take a technology asset to a value that is significantly higher than we took Puridify too. If I could have the mandate to do that within a larger organisation I’d be really happy to, but I don’t think that’s a reality – getting back into the entrepreneurial world is kind of inevitable.

‍Q:If you could add one skill to your repertoire, what would it be?
‍A: There are quite a few. There are scientific fields I’d love to have a much better handle on as being knowledgeable in Data Science, AI or ML practices would be helpful at this point in time. Thinking more broadly, there are situations when I would have benefitted from being more patient or more confident, but I’d hesitate to give those as an answer. What makes me the individual I am are all my attributes - good and bad - and if you begin to change that then maybe I’d have had worse outcomes in other scenarios. I hope I’m still on a steep learning curve and I hope I remain mindful of that but overall, I content being me.

‍Q:How do you define success? Whether for yourself or for the business.
‍A: For the business, value creation. That’s got to be the goal, obviously there are many other aspects of equal importance (employee or customer satisfaction, patient benefit, social or sustainable values) but without creating value in the underlying asset I don’t think achieving any of those is realistic. For me personally it’s a sense of achievement, both individually and as a team. Seeing individuals achieve and grow which ultimately culminates in the success of the group is really what it is all about for me. It is incredibly rewarding seeing everyone being proud of their contribution to the overall success.It’s funny as a Founder/ CEO I often get asked if I’m sad about no longer being in control or ‘letting my baby go’, but it is such an alien concept to me. I basically walked out of the lab when we started the company and I haven’t been involved in the technology since, I’m not wedded to it at all. It’s the development of everyone in the company and the people we work with, the collaborators that have supported us that’s really important to me. I think as long as everyone is working together, aligned to the same outcome and you’re getting little wins along the way – that is what success is for me.

‍Q:What do you think Deep Tech needs more of?
‍A: I think it’s really about people engaging across disciplines, realising that people need to connect, reach out, share ideas but also have fun along the way. It’s really important that people are happy and excited with what they’re doing, because if you’re not, you are never going to get the outcome you want to achieve. I think whatever it is your doing, wherever you are, you really need to believe in what you’re doing, you need others to believe in that journey too – so build them into the process and bring them along for the ride.

Back to all content
Get the latest from Insights in your inbox.
Thank you! Your submission has been received!
Oops! Something went wrong while submitting the form.